The asteroid belt is a region that exists between the orbits of Mars and Jupiter where a high number of asteroids have settled in their own orbits around the sun. There are hundreds of thousands of asteroids in this region, ranging in size from the dwarf planet Ceres down to a dust particle.

Facts about the Asteroid Belt

Unlike the images of a dense region of rock as shown in science fiction, these asteroids in this region are spaced far apart. If we were to imagine travelling in this region in a spacecraft it would be difficult to hit an object without deliberately aiming for it. The total mass of material in the asteroid belt is estimated to be about 4% of the mass of the moon.

Prominent Objects in the Asteroid Belt

The most prominent objects in this region are Ceres, Vesta, Palla and Hygiea. These four bodies make up for half the mass of the asteroid belt. Ceres itself being the biggest being made up of around a third of the total mass.

The chart clearly shows the mass that the main objects in the Asteroid belt as a part of the total mass.

Ceres was discovered in 1801 and was originally designated as a planet, until other similar sized objects were discovered in the region. The name Ceres comes from the Roman God of agriculture. 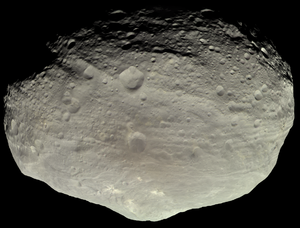 Vesta has a mean diameter of 326 miles (525 kilometers) and is irregularly shaped.  Vesta’s mass makes up about 9% of the total mass of the asteroid belt.

Vesta was discovered in 1807 and is named after the virgin Goddess of home and heart in Roman mythology. 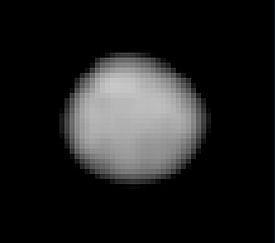 Pallas is the third largest object in the asteroid belt, with a mean diameter of 318 miles (512 kilometers) it’s mass makes up for about 7% of the total mass of the asteroid belt. It is thought that Pallas is a proto-planet – the embryo of a planet that didn’t continue to form.

Pallas was discovered in 1802 and is named after Athena, Pallas is an alternative name sometimes used for Athena. Some stories say she took them name from a friend that she killed.

Hygiea is the fourth largest object in the asteroid belt, it’s irregular shape put’s it’s diameter at somewhere between 200-300 miles (350-500 kilometers) and makes up about 2.9% of the total mass of the asteroid belt.

Hygiea was discovered in 1849 and named after Hygieia the Greek Goddess of health.

In September 2007 the Dawn mission was launched in order to carry out observations on Vesta and Ceres. The mission was the first to visit two non-planetary objects. In order to be able to have the power to visit these two asteroids it uses a highly efficient ion drive to propel it.

In 2011 Dawn entered orbit around Vesta and carried out observations for a year. Dawn made discoveries about two massive asteroid impacts on Vesta, that damaged it’s interior and crumpled part of it’s surface and also about dark, carbon rich material observed on Vesta.

In 2012 the Vesta phase of the Dawn mission ended before proceeding to the second part of the mission – Ceres.

In March 2015 Dawn entered orbit around Ceres, but even before it arrived there one feature on Ceres was shining out to us – literally. Two bright spots shining out from with a crater named Occator. From a distance it looks like two bright shining lights are beaming out from the surface, theories bounced around about what these spots could be and certainly they’re tantalising as they are in stark contrast to the otherwise dusty grey surface.

Dawns mission to Ceres’ has been dominated by finding out more about these spots and has been getting closer and closer to the surface to try and find the answers.

It is now thought that the white material is sodium carbonate, brought up to the surface by some kind of hydrothermal activity. This puts the possibility of water or water ice beneath the surface of Ceres and that the core may be hotter than originally thought.

What next for Dawn though? Dawn is likely to remain a permanent satellite of Ceres due to it’s highly stable orbit. But there is the possibility that the mission could be extended and a flyby of a third object such as Pallas could be carried out.

What is clear from the Dawn mission is the difference between asteroids and comets is less clear and of course even seemingly boring old asteroids hold secrets of great interest. Although they’ve not yet found huge spaceship eating worms!