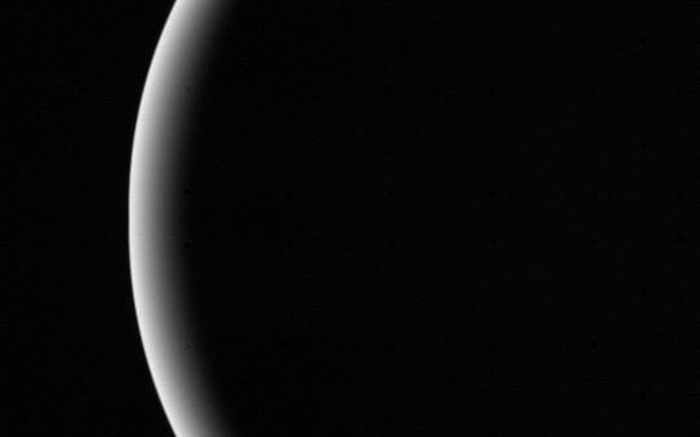 We’re really getting far away from the sun now as our exploration takes us to Uranus. Uranus is the first planet to have been discovered in relatively modern times with a telescope. It was discovered by William Hershel in 1781 who at first thought he had discovered a comet.

Uranus is the ancient deity God of the sky Ouranos, in Greek mythology. Father of Cronos (Saturn) and grandfather of Zeus (Jupiter).

Uranus is composed of an icy / metallic core and a helium / hydrogen atmosphere. The exact composition is not exactly known, but between 9 x and 13 x Earth’s mass makes up it’s core, the little remaining mass is it’s atmosphere. 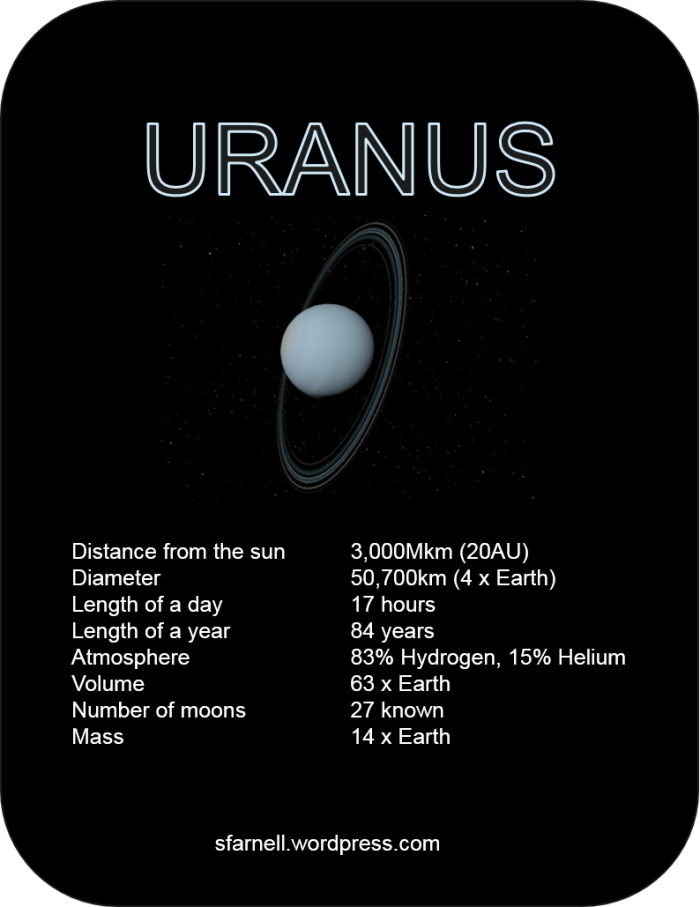 Uranus has 27 known moons, the 5 main moons are: 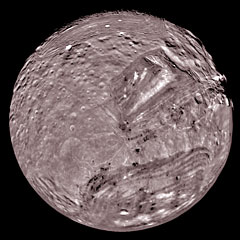 Named after Shakespeare’s character in the tempest, it was discovered in 1948 by Gerard Kuiper. At 470km it’s the smallest known object to be spherical under it’s own gravity. It’s tidally locked to Uranus so only one side ever faces it.

It’s surface is one of the most diverse in the solar system, this was discovered in the 1986 Voyager 2 flyby. It’s been suggested that  this is due to internal heating from Miranda’s interaction with the other nearby moons. 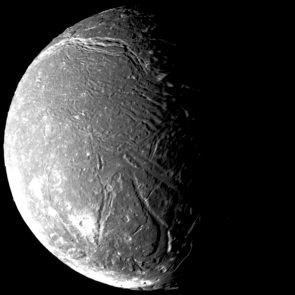 Discovered in 1851 by William Lassell, Ariel is named after two characters in literature. Composed mainly of rock and ice Ariel is 1,150km  across. Several different terrain types have been identified on Ariel, Ridged, cratered and plains, each of these giving clues to the age of the different terrains and how the moon was formed. 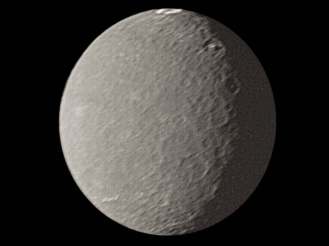 Umbriel was also discovered in 1851 by William Lassell, named after a character in the poem The Rape of the Lock by Alexander pope. Umbriel is the darkest Uranus’s moons, again it’s made of rock and ice, it’s the most heavily impacted of the moons and this has a lot to do with how the surface was made. At 1,160km wide it’s Uranus’s third largest moon and the third furthest from Uranus. 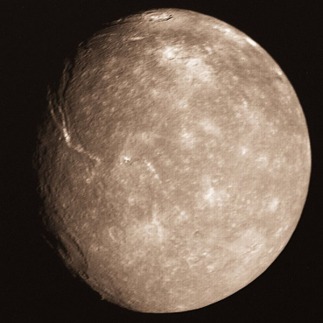 Titania was discovered in 1787 by William Herschel, is named after the queen of the fairies in A Midsummer Nights Dream. Titania is the largest of Uranus’s moons at 1,578km and the 8th largest in the solar system. Titania’s surface seems relatively less damaged by craters, this could be due to a surface melting that occurred, obliterating the old surface. 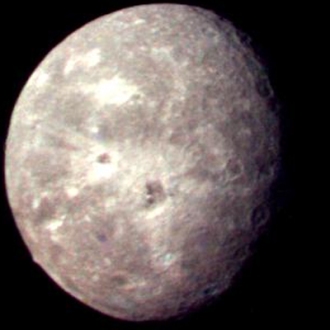 Titania was discovered in 1787 by William Herschel, is named after the king of the fairies in A Midsummer Nights Dream. Oberon is 1,522km in diameter, the second largest of Uranus’s moons, it’s heavily cratered with an apparent slight red tint. Like all the other moons, it’s made mainly of rock and ice and is the furthers from Uranus.

Uranus has rings, like all the outer planets. They were discovered from Earth in an unusual way though. An airborne telescope flying over the pacific was using Uranus occultation of a star to make observations of it’s atmosphere. When the signal started dipping they thought that instrument faults had ruined their data. 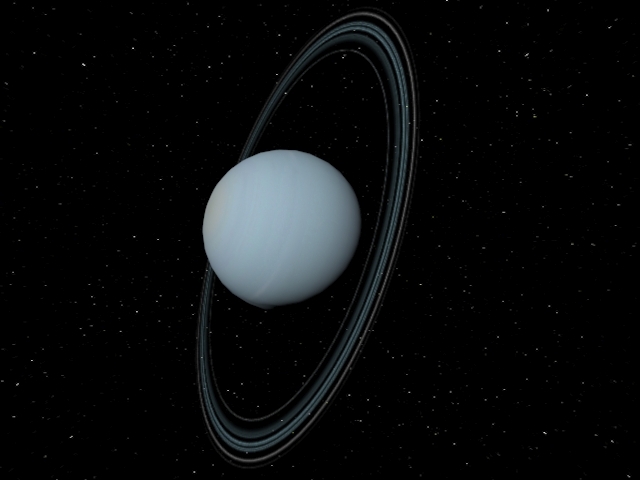 It was only after comparing the data before and after the occultation that they realised the ring dips were symmetrical – that had found the rings of Uranus.

The piece that Holst composed for Uranus is unusual to me, I’m not sure what the images were in his mind when it was written. But nonetheless, like a magician it didn’t give up it’s secrets easily and still doesn’t. 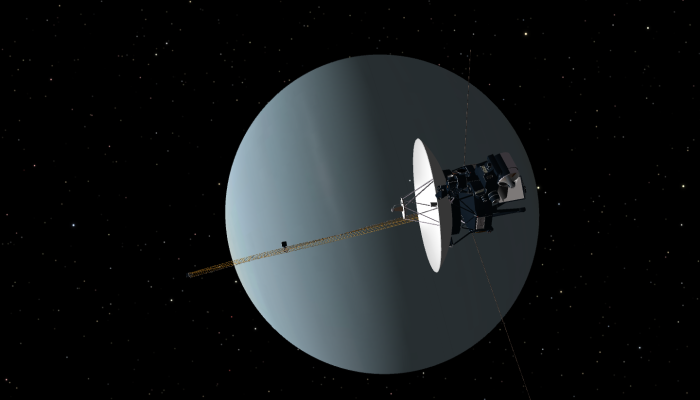 Voyager 2 is to date the only human space craft to have visited Uranus. It flew past the planet in 1986, using the planet’s gravity to  guide it towards it’s final destination of Neptune.

On it’s approach to Uranus the scientist were expecting to be able to see more detail in the atmosphere as the probe approached. Even at a close distance Uranus’s atmosphere is virtually featureless. Only a few storms at very close range yielded any detail. 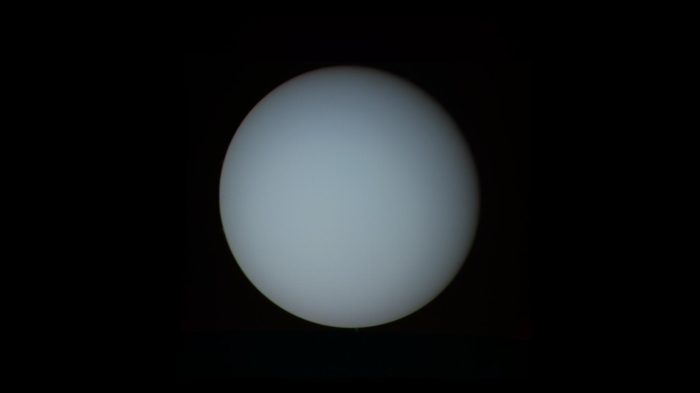 This was the view of the planet on it’s approach, the rings were not visible as they are faint. 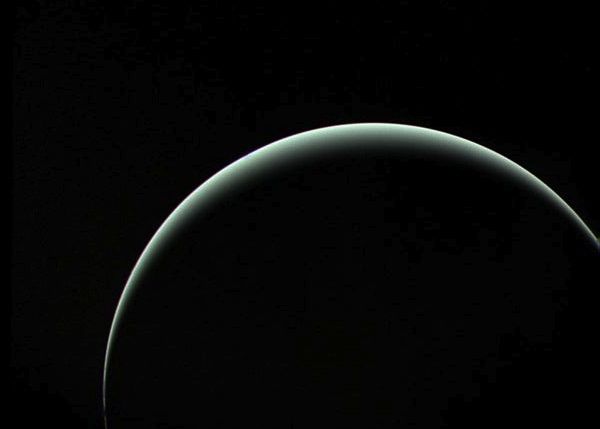 Voyager passed by Uranus and used it’s gravity to fling it towards Neptune, it’s final destination in this solar system. To date Uranus has not been visited again by a human spacecraft, many of it’s secrets are yet to be discovered or solved.