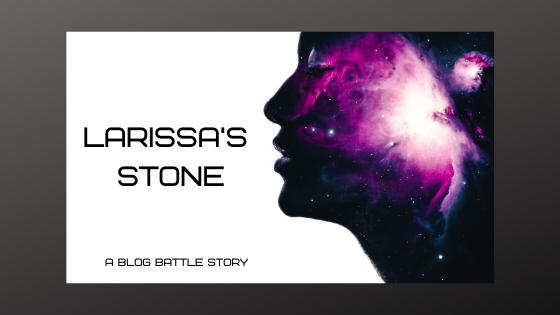 This was the Blog Battle Entry for April 2020 and the prompt was Brooch.

Larissa rested against the bulkhead of the access way, she was allowed this far but no further. She had no money and none of the captains would take her where she wanted. The bulkhead was cold against her skin, even through the thick coat she had, a cold wind blew in as yet another freighter departed. He hair was blown about in the distant wake, the gentle warmth of the engine exhaust felt good against her skin, the smell of the engine exhaust permeated her nostrils.

Weak, dirty and tired Larissa had traveled far from home. Alone and frightened the life she had grown up with these last twenty years was now gone, wiped out in a single act of aggression. She thought to herself that she was lucky to be alive. ‘Lucky’. lucky to have been able to live these last five days, no food, little water and getting here only by hiding in dirty maintenance hatches of supply transports to this one outpost to the stars that this planet had.

Her fingers found the one last gift from her father a Dritanium bracelet, a dull silver in colour, light and yet strong. It was to large for her wrist. He had given it to her a mere hour before she watched him disintegrated. Get to the Tal-Ver spaceport, he told her he would meet here there. She slid down the bulkhead to sit on the floor, a tear ran down her cheek – she couldn’t see what hope she had left. Her only oath in her short life now was to lay where she was and starve.

Another ship’s exhaust washed over her from far off. This one smelled different. More metallic.

“The engine lining’s on that ship are worn, it won’t last long out there.” She whimpered. He father had been a spacecraft engineer all his life. He had taken her all over the space port and into the inner working of some ships ever since she could remember. The smell and light faded and as it did her memory was disturbed as a shadow fell over her.

Larissa looked around to see a man that was old, too old she thought to still be working the freighters, but he seemed somehow familiar and it wasn’t the wild white hair that he boasted.

“I would recognise that that wrist band anywhere!” The old man exclaimed. “You look like you’re in a bad way, can I help? How’s your father? I’ve not seen him for years now, what’s he doing with himself?”

Larissa could no longer hold back her tears, flooding down her cheeks she sobbed as the old man helped her up. He searched his pockets and finding an old rag offered it up to wipe her tears.

“There, there, what’s all the tears about?”

Larissa looked at the man, but no words came.

“I have lived a long time.” The old man said grimly. “It’s at times like this that realise it may be been too long. When?”

“five days ago.” Larissa replied, siffling as she spoke.

“And you made your own way here, you are brave!”

“Dad told me to come here. He was going to meet me here, before…”

The man nodded. “It’s going to be alright, come with me.”

The old man led Larissa away to what was on old cargo carrier, it served now as a surprisingly clean and well run cafeteria. They both say in the far corner away from anyone. A few moments later a rather dilapidated droid clanked over and took their orders. Larissa went over who she was as she ate and drank. It had been so long she would rather have done without the talking. The old man was called Cannick and had been a close friend of Larissa’s father for some years. Cannick remembered Larissa from the days when her father would bring her with him.

Then the talk got a bit more serious. “So what had your father done to attract the attention of the Federates?”

” I don’t know, ever since he stopped working for the space port he hid away for his work and wouldn’t tell me what he was doing, it’s been about five years.”

“Hmmm. I do know a little, but I didn’t think…” Something caught Cannick’s eye suddenly. “What’s that?”

“That, on your left.” A matt black intricately decorated brooch was on Larissa’s top, Cannick pointed at it. Looking around cautiously.

“What this thing?” Larissa passed it to Cannick. He hid it from view carefully and looked at it in his closed hand.

“What is it?” Larissa asked quietly, picking up the hint to be discreet.

“Your father.” Cannick spoke in a low voice. “Thought that by using the same technology that drives our ships to bend space time that a large area of space could be stored and transported in a very small space. Such technology was thought to be impossible, I thought it was impossible until I saw your brooch.”

Cannick carefully held the brooch up for Larissa to see. In the dark centre stone turning slowly about its axis was a spiral galaxy.

“Two weeks ago, rumour started circulating that a galaxy had vanished without a trace. Of course, it has been dismissed mostly as ridiculous. But I think I know where it is!” Cannick said.

Larissa looked into the stone with awe, how was this possible and how and why would her father do this? ON the brooch a symbol was stamped into it, small but unmistakable.

“See this?” Larissa pointed “I’ve seen it before!” Larissa pulled up her sleeve and showed Cannick the wrist band.

“What do we do?” Larissa asked.

“I don’t know, but what I do know is you need to come with me and we need to get off this planet and find someone who does know.”

“Does such a person exist?”

Cannick got up and smiled down at Larissa “Of course, if you know where to look!”