The name Ellie Maloney might not mean much to people here, some of you may remember a re-blogged post on her and her new book 329 Years awake a few weeks ago. Ellie is a very creative Sci-Fi blogger who a while ago went very quiet. It was easy to see why becasue she was working on her first (I hope of many) book 329 Years Awake. What I didn’t realise until I had finished the book was how talented and imaginative Ellie is as a science fiction writer.

I had already bought the ebook version and was partway through it when Ellie insisted that she send me a copy in return for some reviews. How could I say no. The first thing I would say at this point is that I’m a bad person. Why? Because when I looked at the price of the paperback I thought “Hmmm… expensive” but I have to say that was a bad assumption. 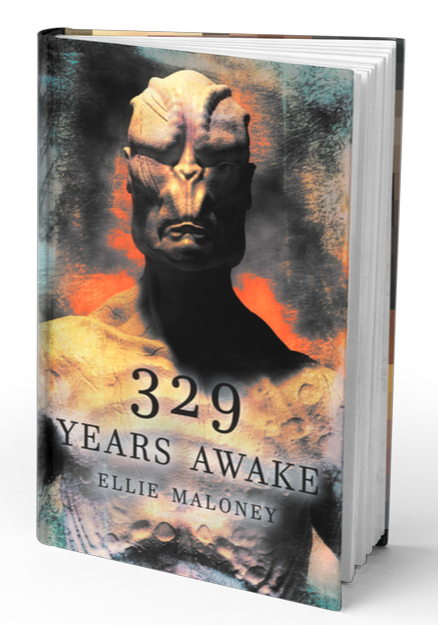 When this arrived just on the quality of the paperback it would have been worth the money. It’s a quality product and inside there are the small things that I don’t find in other books that make this something special – the bits of art, the author profiles etc.

Think of a UFO or a conspiracy theory from the last few hundred years. There’s a good chance that it’s in this book. The brilliance of this story is that it brings together these stories and combines it with a science fiction concept. Adds a dash of the future and the presto.

When you’re reading the first half of this book you think at first that you’re reading a series of short stories from past present and future. You have no clue as to how the story links together, keep reading. Seriously don’t put this book down.

A few chapters in and your brain starts working, not only are you reading the mystery you’re working it out for yourself, you’re part of the story almost. By the time the first half of the book is read you now realise what the start was all about, you can see what’s going on. Then comes the second half.

Two human soldiers imprisoned by an alien race, they have no idea of the significance that their role will play in human history by trying to escape. They have no idea of the capabilities of the human race within one of them. When the truth is revealed and their destinies are about to be fulfilled the ending twists and it shocks you.

For anyone into science fiction or conspiracy theories this is a must read. Seriously.

Humans have a powerful gift: a genetic ability to alter reality, but they know nothing about it. As humans grow capable to oscillate, the Unkari plot on harvesting this ability. Meanwhile, humans are gearing up for war with an enemy they know nothing about. Otis Solarin, a Liberian professor of Space History, was one of the few who discovered his ability to oscillate. Three hundred years later, the destiny of humanity is in the hands of the two soldiers, captured by the Unkari during a failed military operation. Lt. Desiree Mazula and En. Ebony River are the last hope for the Earth Nations to survive the war.