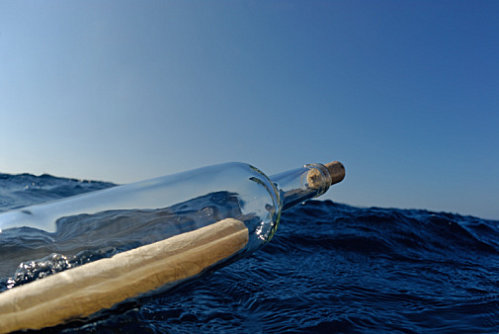 Each winner will receive this awesome #BlogBattle Winner Badge to display with their winning story on their webpage.

The beginning of my story, like all the best ones is a story that wasn’t planned or expected. It was purely circumstance and it starts with a party. There was a group of people around the table, smoking, drinking, laughing and crying. I was among the other bottles in the case and a man reached down and pulled me out. He pulled the top off and in a few minutes my purpose was done. I was thrown into a bin and left.

It was early the next morning when a slight hand, with decorated nails pulled me out. The had was wet with tears, I was hurriedly washed and dried a roll of paper was slipped into me and the end sealed with a cork. I was then taken out into the outside, the young woman walked onto the deck to the back of the ship. The sun was just rising and the young woman dressed a beautiful but well worn gown stood there for a few minutes, staring at the rising sun as tears rolled down her face. When she was ready, she drew her arm back and I was thrown into the sea.

I landed heavily into the wake of the ship, for a few seconds I was submerged in the bubbling whiteness of the wake. When I surfaced, I could see the young woman standing there watching, she had no way of telling if I had surfaced or sunk. That was it… all I could do was watch as the ship sailed off, I was just a piece of irrelevant rubbish, left behind. I had no idea what was written on the paper, and all I had for company was the waves. For many days I floated, alone, the odd fish came to examine me, but quickly lost interest. In my time floating there were many creatures that came close to me, a shark once showed a fleeting interest but for most of the time, it was just me.

Once day the clouds darkened, like a great wall they came towards me, the winds blew up and the rain started falling. the waves grew and their power increased. As darkness fell flashes of lightening lit the sea, I was tossed and thrown all around and I was sure I was going to be broken but I held strong. In the distance some lights were closing, closer and closer they got until the shape couldn’t be mistaken, a ship was coming. It was then that it came, a monster of a wave smashed into the hull and launching me forward and away from the now stricken ship. It’s hull was smashed, and in a short time the ship was listing. Some of the crew escaped on some rafts just before the ship broke in half, the stern was so flooded is vanished almost instantly. The bow rose up, groaning under the strain and then fell to the side and was gone.

For some days I was tossed about, the storm continually battering me, sending me who knows where until finally one day the winds died, the sea calming and soon I was once again on calm and peaceful waters. Once again I was left for so long, winds came and winds went, my path and destination left to the forces of nature… or the gods. Seagulls flew overhead, their calls reaching out across the water. They settled around me on the water, sometimes pecking me to see if I was anything tasty for them. They came and went as the waves rose and fell. 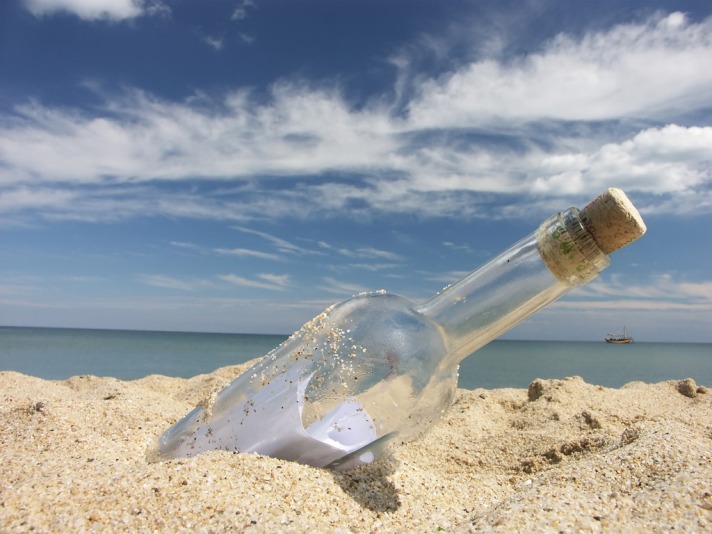 One night, on the light waves of a calm sea, I landed. The waves washed me up and up, then suddenly I was still. Half embedded in the soft sand, the sea washed around me and held me there. I had arrived back on land, I wasn’t even floating, now I was just waiting. Waiting for what, had I come this far to be thrown into a bin? Was there more?

In the morning a the bark of a dog could be heard getting closer and closer. The suddenly a little girl picked me up and ran with me.

“Mummy, mummy, look what I have found!” The girl handed me over to her mother.

“Wow baby, you’ve found a bottle with a message in it!” The mother replied

“Open it mummy! What does it say?”

“Lets have a look.” The mother pulled out the cork, and shook the bottle to remove the message. The mother unrolled the slightly damp message, she stood there for a moment, reading it. A tear rolled down her cheek, composing herself, knowing her daughter couldn’t read it she passed it to her daughter. Who looked over it with glee.

“What will we do with it mummy?”

“I have an idea” The mother replied, “come on, let’s get home we have to get a few things.”

Later that evening, the mother sat down and sipped a cup of tea, looking over at the message, framed and mounted on the wall and the candle, placed inside me and lit to shine on the message, the cork tied with string around me. That is now where I spend my endless days, a lowly beer bottle that became a family treasure.

No ownership claimed on images.

12 thoughts on “Waves of Destiny #Blogbattle”